Basic Boxing Moves for Beginners: Perfect Those Punches with our Boxing Stance Guide

Basic Boxing Moves for Beginners: Perfect Those Punches with our Boxing Stance Guide 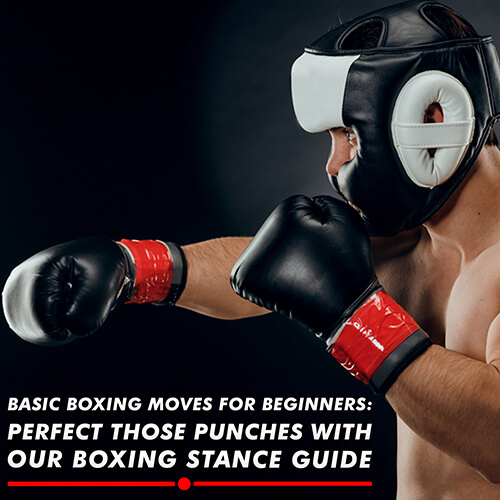 Whether you’re just learning how to fight, or want to go to some cardio classes that incorporate boxing moves, it’s essential to know some boxing basics.

Practicing basic steps is the best way to get the hang of the proper form and to avoid injury. You don’t want to pull something trying to get into training without knowing what to do.

There are a few basic boxing moves that correspond to numbers: you might have heard someone call out ‘1,2,1’ in the gym and wondered what they meant.

Let us lay them out for you as the numbers suggest. This is your guide to basic boxing moves which involve the upper body: think punches.

You can consider this the actual first move, because without proper stance you’re nowhere. Stand with your feet shoulder-width apart, and take a step back with the leg that’s on your dominant side (if you’re right-handed, that’s your right leg.) The toes of the foot that’s in front should align with the heel of the foot at the rear. Keep a slight bend in your knees, and turn your head towards your front shoulder. Keep your fists up under your eyes to protect your face, and your chin downward.

The perfect boxing stance is necessary for a variety of reasons:

The jab, is known as “1” in combinations. It’s generally the first punch taught to boxers and is a low-energy attack position.

This is called a cross because of the way it goes across your body, turning it. Usually, a cross from your dominant hand will be the strongest punch you can throw.

Typically, this would be a left hook. A right hook is a less used move that mostly right-handed people prefer in close range.

This is a right upper cut, but the opposite directions can also be used for the left.

The moves discussed above are used in combinations for all your basic boxing needs, but one thing you need to remember is how breathing also comes into play along with these moves.

When you throw the punch, exhale through your mouth, while keeping your mouth as closed as possible.

Leaving your mouth open makes you vulnerable because your jaw can be broken if punched in this position. Steadying your breathing engages your mind and body and keeps you focused. Trying it with these boxing moves to have a solid fighting base.