How to Measure Reach in Boxing, MMA and UFC

How to Measure Reach in Boxing, MMA and UFC 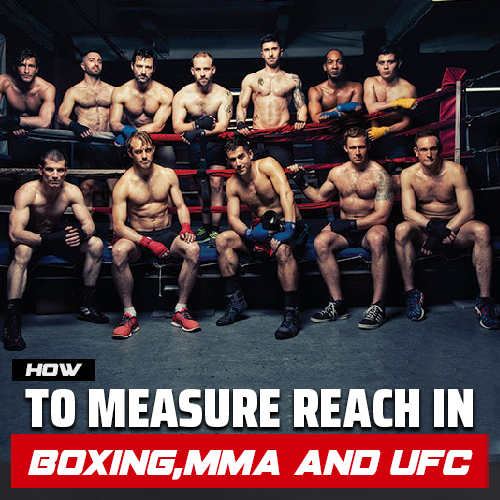 The main question here is, what does reach even mean in boxing? In layman's terms, it refers to how far a fighter can stretch out their arms to land a punch on their opponent. This is particularly important for fighters to know, because in the midst of combat they have to reasonably estimate the optimum distance from their opponent. Not only does this help avoid a heavy blow, but it also helps them land those critical do-or-die hits right on target. There are different ways to measure the reach of a fighter: the easiest way is to have the fighter stretch out their arms to either side and to measure from fingertip to fingertip. The reach isn’t simply an arm measurement. The width of the fighter’s chest is also taken into account; essentially, it is their wingspan in totality.

The use of reach in Boxing, MMA and UFC

Here, the saying ‘know thy enemy’ comes to mind. For every fighter, studying and being aware of their opponent’s reach is vital. In case they get too close, or within their opponent’s wingspan, they can easily be on the receiving end of a series of punch combinations. In other words, what you don’t know can hurt you, and in this case, cost you a win.

In a boxing or MMA ring, opponents are determined by their weight class. Since, because of this, a fighter won’t have an added advantage in terms of mass, it all comes down to height or wingspan. Fighters who are relatively tall have an advantage over their opponents, as  with their reach as they have the propensity to land more hits, or even get their opponent into a lock that can force them to forfeit.

Fighters that have long arms keep a strategy of having a safe distance between themselves and their opponent so that they can land long power punches. However, boxers who are short prefer to fight close to their opponent and land quick, powerful jabs that can floor them in seconds.

Whether you have a long reach or a short one, it isn’t the only factor that helps land a win. How you use your body, your rhythm, pace, reflexes and finally your decision making in the ring all contribute to your value as a fighter. With great fighters, they know that all these things have to work in tandem to emerge victorious.

Who has the longest reach in boxing?

What is the importance of reach and what does it help you achieve?

Long reach can be very helpful in creating a barrier or buffer around you: opponents would be reluctant to kick or throw punches at you in close range because they know once they move too close, they would be at risk. If you are blessed with a long reach then you have a fair, natural advantage over your opponent; but unfortunately, reach is not enough to make up for other shortcomings in terms of technique. You need to be quick on your feet, decisive, have fast reflexes and be strategically sound. Techniques such as having a solid side body pose can help make up for a lack of reach, so that when you go for a jab, the tilt of your side gives you more room to reach your opponent. Enlist the help of superior fighting equipment such as a sturdy pair of gloves to compliment your reach and have all your bases covered.